“oldest tannery in the world”

The Chouara Tannery is the busiest and largest tannery among the four historic tanneries of Fez. It is also the oldest tannery in the world. Operating in the medina, the tannery is home to leather produced from sheep, cows, goats, and other such animals.

Here, the skins are scraped, cured, stretched, and dyed in several honeycombed earth pits. This process of tanning initially came into existence in the 13th century. The skins and hides undergo an array of procedures, as stated above. In addition, the city as a whole is quite an appealing attraction for tourists.

From cobblestone streets, small yet fascinating houses, magnificent buildings, and never-ending views, the Chouara tannery is quite an exquisite place to visit.

Tannery workers washing skins in the Oued Bou Khareb (photo from 2006; before recent renovations to the area).

Tanneries have historically always been treated as polluting areas due to the waste runoff and the strong smells that they create.[7] Since the 19th century the tanneries have made extensive use of chromium in order to aid the tanning process.[10][11] Certain types of chromium are toxic and the tanneries also produce various other organic wastes, which has resulted in large amounts of pollution contaminating the soil and the rivers downstream from them.[12][10][13] Tannery workers and other locals have long complained of adverse health effects, with the most serious cases leading to cancer and early deaths.[11][14][10] In the 21st century a widescale project led by Aziza Chaouni was launched to rehabilitate the Fez River by improving its urban environment and attempting to control the amount of pollution.[15][16][17] At one point the project had proposed to end or curtail the operations of the Chouara Tannery and relocate the tanning industry to another location where its pollution could be managed more safely, while the tanneries themselves would be converted to a different economic model or potentially reused as a public space.[18][14] In the end, however, the tanneries were restored and left in place.[19]

“It is the objective of the Park Service to maintain a balance between the unparalleled drama while preserving safety for the enormous volume of visitors.…”

The most notable feature of Chouara and the other local tanneries is the numerous stone vats filled with different colored dyes and white liquids. Hides of cows, sheep, goats, and camels are processed by first soaking in a series of the white liquids – made from various mixtures of cow urine, pigeon feces, quicklime, salt, and water – in order to clean and soften the tough skins.[3][8][9] This process takes two to three days and prepares the hides to readily absorb the dyes. They are then soaked in the dyeing solutions, which use natural colorants such as poppy for red, indigo for blue, and henna for orange.[9][8] After the dyeing, they are dried under the sun. The resulting leather is then sold to other craftsmen, who use it to produce Morocco’s famed leather goods, such as bags, coats, shoes, and slippers, prized for their high quality. The entire leather production process comprises manual labor only and involves no modern machinery, and has retained methods unchanged since medieval times.[9]Interestingly, enroute to our first trail-head, we encountered a Park Ranger managing a small gathering of people parked along the main entry roadside. Expecting authoritative behavior we actually got a tour guide… “take my binoculars and look over across that field, there’s a 600lb. Grizzly atop his freshly killed Elk”–WHAT! Even more surreal, this Ranger was Yao Ming’s doppelgänger–it all caught me off-guard. You’ll have to look carefully at the shot (after the buffalo below) to make things out, I was too far out for my 200mm lens to bridge the distance properly but I wasn’t about to, or be allowed to approach any closer. 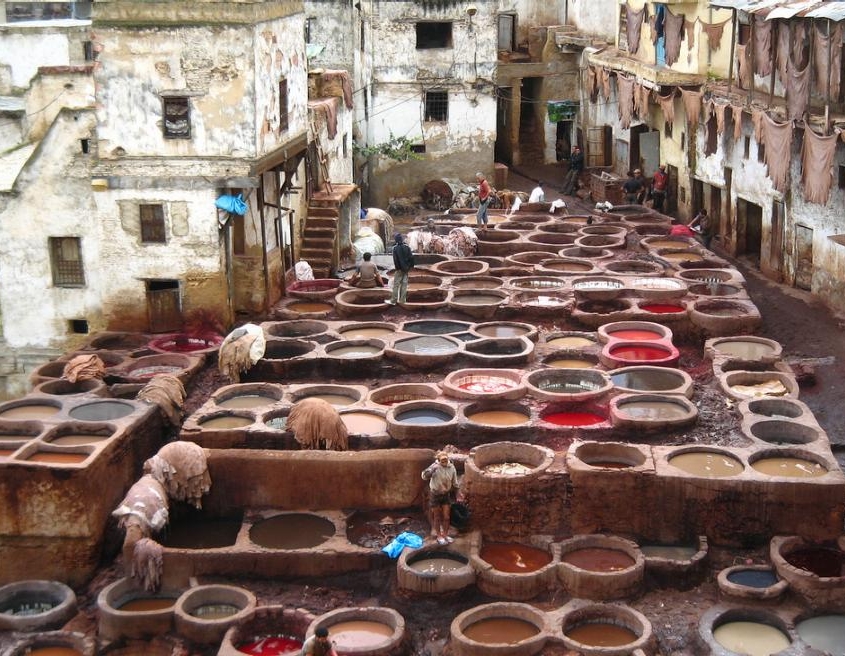 Norris Basin is the largest geyser network in the world. Nearly every turn reveals astounding visuals with colors as brilliant as the waters of the Bahamas. Occasionally a visitor will fall into one of these pools and with temperatures reaching 200º F the outcome is not a good one, and often fatal.